Prison disturbance 'was near riot' 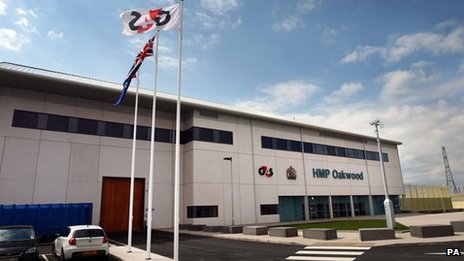 An inmate at a privately-run prison has claimed a disturbance that authorities say ended peacefully after a few hours was actually a "near riot".

A group of prisoners at HMP Oakwood, near Wolverhampton, refused to be locked-down at 17:15 GMT on Sunday, leading to a 10-hour disturbance, BBC reporter Giles Latcham was told.

They allegedly barricaded the entrance to the Cedar Wing and smashed windows.

Operator G4S said one prisoner was treated for minor injuries.

The disturbance, which G4S said involved between 15 and 20 prisoners, was brought under control just after 02:00 GMT without injury to any prison officers. The BBC was told up to 50 prisoners were involved.

Officers in riot gear entered the prison, in Featherstone, which has a mixture of category C and D prisoners.

There were two rooftop protests at the jail last year. G4S could not confirm if the latest incident was linked.

Iqbal Singh Kang, from Gurney Harden Solicitors, who represents some of the prisoners, earlier called on the government to reconsider its contract with G4S.

Mr Kang said inmates described Oakwood as a "dreadful prison" which was "not very well run".

"The protests have manifested themselves after a number of issues. When those grievances aren't addressed, it results in the prisoners taking action," he said.

Mr Kang claimed the prison provided little in the way of employment and rehabilitation for inmates.

"This situation has gone on long enough and the government can no longer tolerate this nonsense."

However, a spokesperson for G4S, which has been running the jail since it became privately run in April 2012, said rehabilitation was "central" to the company's work at the prison.

He added he did not know whether the disturbances, in one wing, were linked to two rooftop protests at Oakwood, which took place in 2013.

"There have been incidents at the prison but it is still in its start-up phase," he added. "There are often problems at prisons in their early years."

He added G4S had ambitions to make Oakwood "the best prison in the world".

A spokesman for Staffordshire Police said the force had offered support and assistance to G4S.

Chancellor George Osborne told BBC WM "it was very early days" for the prison and said "no conclusions" could be drawn about whether private companies should run prisons.